The treatment is a little painful. But the pain is acceptable if treated by a licensed doctor. VIVALaser is a manufacturer of high-quality laser machines.

We offer laser tattoo removal video guidance and a user manual. If you want to know more info about the machine, please Send us an inquiry 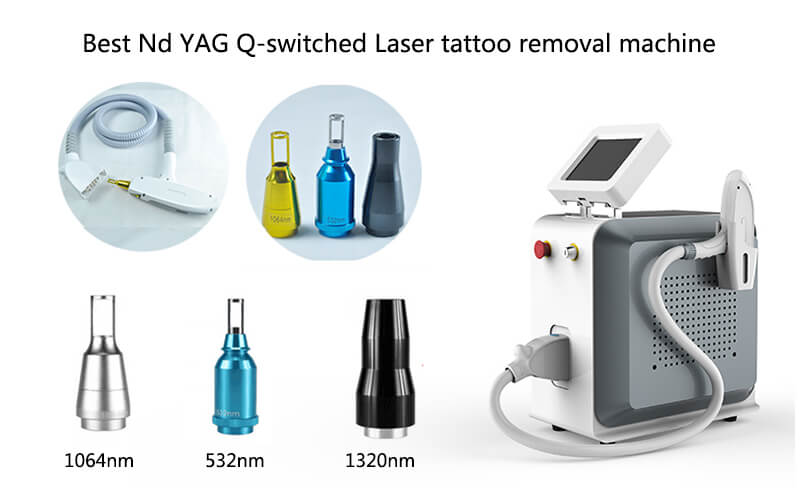 The laser selectively targets and removes the tattoo without damaging the surrounding tissue. Laser tattoo removal healing process decreases scarring. Most tattoos do require a series of treatments. It depends on how deep and what color is the tattoo. 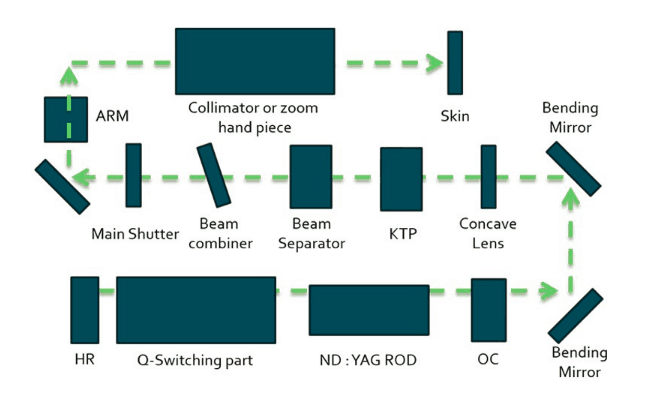 The Tattoo is made up of many particles of ink pigment suspended in the skin. In the tattoo removal procedure, The nd YAG laser handpiece passes the energy to the target inks. The YAG lasers destroy the ink in the skin cells into a much smaller particle size. Your immune system clear the tiny particles out of the body.

What can nd yag laser tattoo removal machine do?

Nd YAG q-switched laser and picosure, which one is better? Tattoo removal laser machines are safe and effective. We will answer the question from these points:

Safety: Which tattoo removal is safer?

Speed. Which is the safest tattoo removal laser?

Health: Which laser is good for my skin?

Cost: Do I need to pay a lot for tattoo removal treatment?

Nd YAG Q-switched laser and picosure, which is the best?

The 2 popular tattoo removal machines that are currently being used: the Q-Switched Laser and the Pico Laser.

What is picosecond laser and how it works?

The mistake you hear from pico laser

Too much hype about picosecond laser is not true. Some manufacturers, beauticians, and clinics are enlarging the result of Pico laser. There is no clinical evidence.

There is evidence to prove the mistakes. Please check.

It is not true. The main factors affect the treatments as below.

Incorrect. Nd YAG Laser is a technology which has been proved effective for ink tattoo removing. Pico laser is most likely less effective in removing all shades of the tattoo.

Mistake 3: No side effects of picosecond laser treatment.

The reality is just the opposite. There are many stories of people getting severely burned and scarred from Pico Lasers. Pico laser treatment has a larger risk for side effects.

It is not true. The factors for the speed of laser treatment:

VIVALaser offer different type laser tattoo removal machines. The price is different due to the model and order quantity.

So What is exactly the best laser tattoo removal machine?

How many sessions do I need for laser tattoo removal?

It depends. The main factors are below.

Generally, you need 6 to 12 times by single rod ND YAG Laser. If you are a skillful operator and using double rod nd YAG laser. 1 to 3 times you could remove all the tattoo.

The interval of each treatment is 40-50 days. Our skin needs time to heal. The Nd Yag laser destroys the color into the small fragment. Your body needs time to pull the fragment outside.

For each treatment, you could see changes and results. Take laser tattoo removal before and after pictures to record.

How much does it spend on starting your laser tattoo removal business?

First, all your cost including Machine cost, shipping cost, and Tax. The amount is between several hundred to thousands of dollars.

Several clients, you will earn your cost back.

The pain or hurt is acceptable. Cold air and numbing cream decrease the pain.

Is there any risk for Laser Tattoo Removal treatment?

VIVALaser laser tattoo removal machine is CE approved. The side effect is minimum. But you should notice:

Have more interest in laser tattoo removal risk and side effects? please click:

How much does laser tattoo removal machine cost?

It ranges. The price vary depends on what brand and what type of laser machine. VIVALaser is the laser tattoo removal machine manufacturer. The machine is effective and price reasonable.

Yes, it works. The PicoSure laser has an obvious result. But the price is high. Choose an affordable machine, VIVALaser is your best choice.

Could an esthetician do tattoo removal?

If you have trained, estheticians could handle the laser machine well. Also, check your countries’ law. Different countries have different rules.

It depends. Depends on you defination for home tattoo reomval machine. If you order a very tiny laser machine such as a pen, the result is no good.
But if you bought a Mini size whole machine, it works.

What is the wavelength for tattoo removal laser?

Tattoo removal laser is actually the ND YAG laser. The tattoo laser wavelength is 1064nm & 532nm. 1064nm is used for black and blue ink, while 532nm is for red and brown. 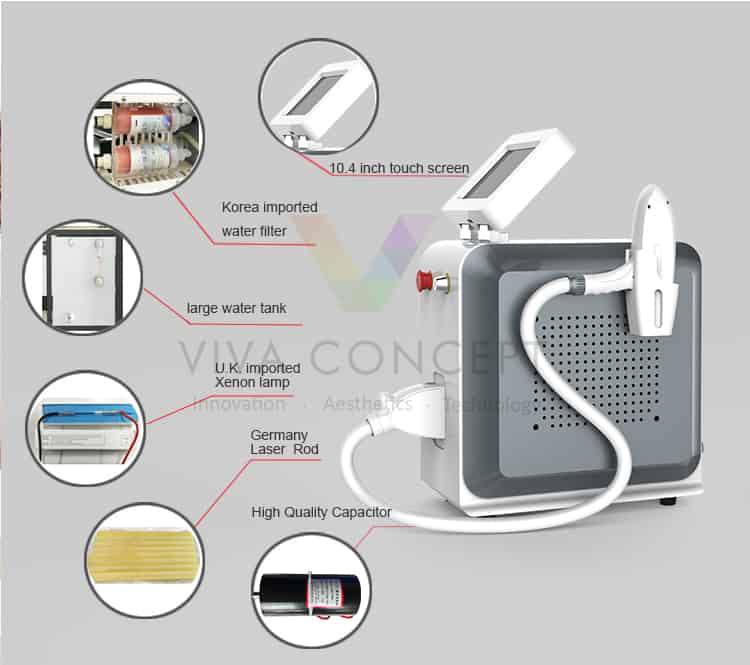 Power and energy affect the tattoo removal result. Weak energy could not clear the tattoo efficiently. The process is painful and not effective.

The frequency for laser tattoo removal machine is 10Hz. The Treatment is fast and precise. There is an aiming beam on the handpiece.

The spot size for laser tattoo removal machine is 1 to 10mm. The spot size is adjustable. We could adjust the spot size according to the treatment area.

1064nm treatment tip is for black, blue and dark color.

532nm treatment tip is for the red and brown color.

755nm is optional. 755nm picosecond tip is for laser facial. 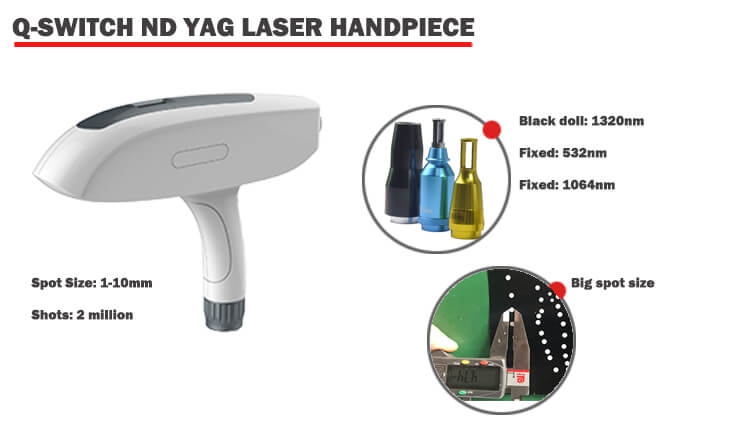 We offer 2 years free warranty for the YAG laser except consumable parts. We offer free parts to replace if there is any trouble.

If the machine is not in the warranty, we offer repairing service. Our engineer is skillful enough. We could repair different brand laser machines.

All our ND YAG laser machine passed the CE certification. With CE approval, quality is guaranteed. You will not have trouble in customs clearance and using.

VIVALaser is a professional laser tattoo removal machine manufacturer in China. We have the ability to offer quality YAG laser machine. We could ensure 7 days delivery. 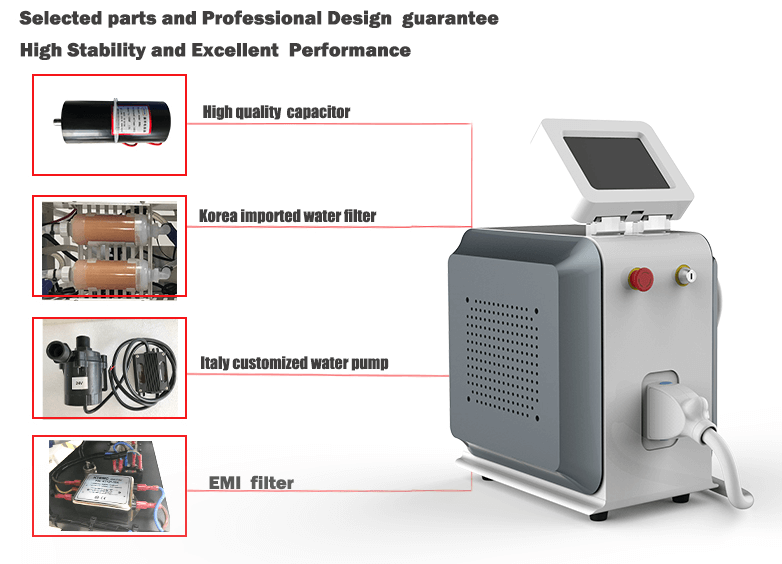 VIVALaser has a complete rental & lease system in China domestic market. We have rent and cooperate with more than 1,000 spas and clinics. We use IC Card to record and calculate the rental fee.

For the overseas market, we could copy domestic experience. We will design a solution and program for distributors.

Tattoo laser equipment rental will help you to use a good laser device. You could start to rent for one or two months. Check if the clients are satisfied with the results.

Remember that the trial and error process is a little risky. Our suggestions: find a reliable supplier and start your tattoo removal business.

Renting medical lasers for tattoo removal saves money for you. All you need to pay is the monthly fee, and the rest will be all profit.The biggest advantages of renting then buying is less investing and quick profit.

Laser tattoo removal before and after 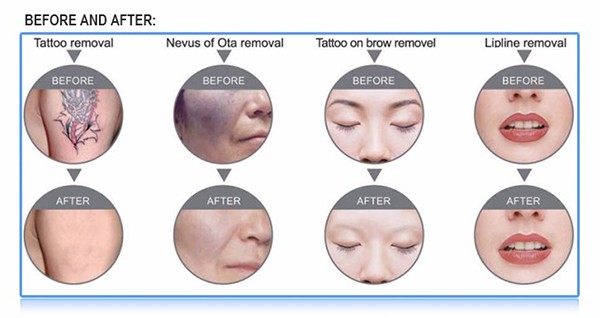 In 8 to 72 hours, patients develop blisters, crusts, or scabs. It will last for 7 to 15 days. When the scab separates, the treating area may become pink or pale.

Don’t worry about scarring. It may happen, but the chance is very small. Our body is powerful enough for healing. In 4 -6 weeks, the area will heal.

Tattoo removal price varies due to the tattoo size and ink type. Here is a reference price list for tattoo removal treatment.