Coolsculpting machine for sale is a professional design for spas, clinics and at home use. The allergen coolsculpting generates stable and powerful cooling energy. It penetrates into the patient’s subcutaneous fat layers. Then leads to apoptosis, disposing of dead fat cells through the body’s metabolism.

To ensure safe and effective stubborn fat removal. 360° Surround Cooling cups only works on fat deposits for crystallization. The cryoplipolysis machine VA-360 will not destroy the surrounding tissues or nerve areas. 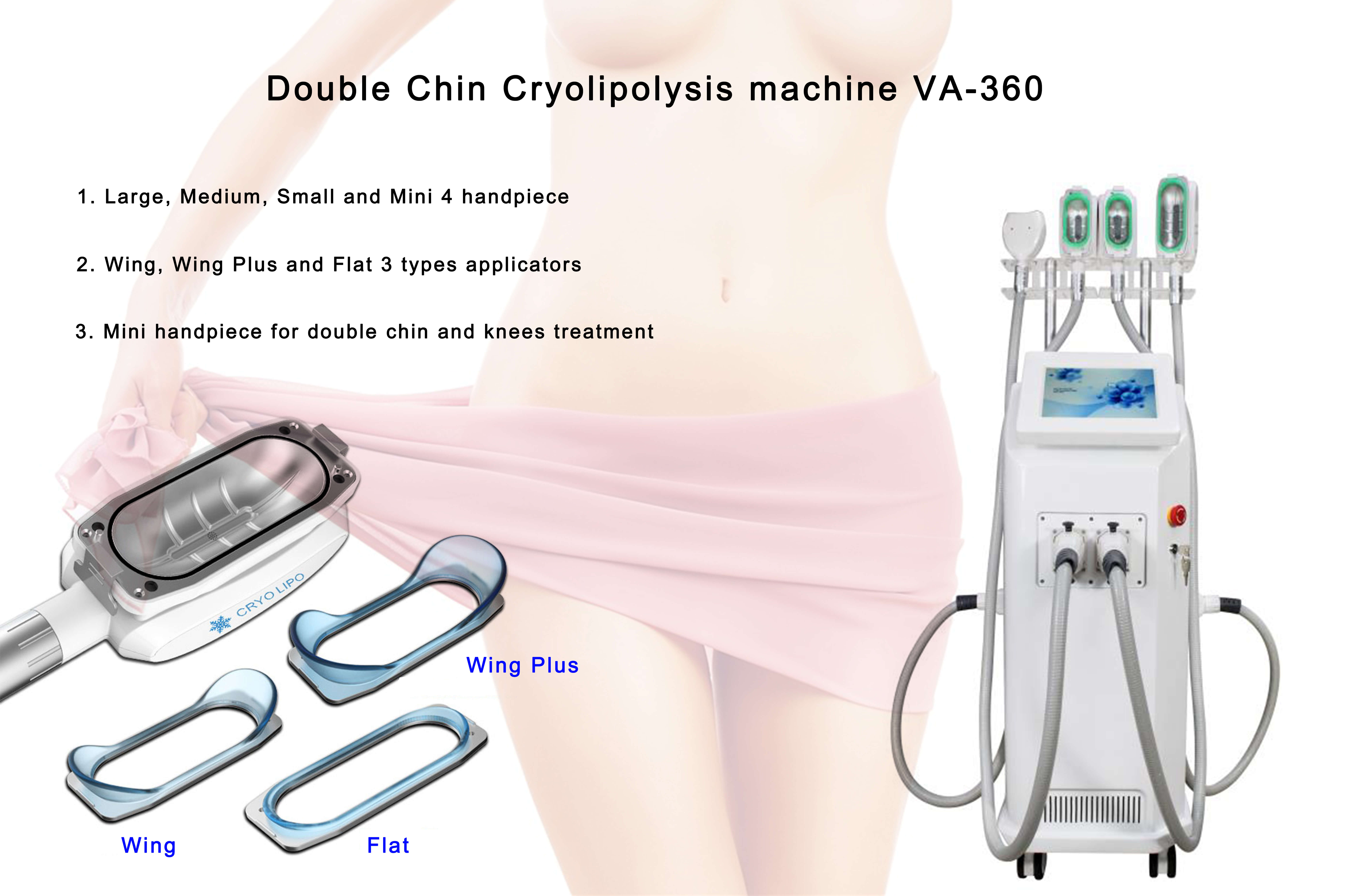 How much does coolsculpting machine cost?

There are many different coolsculpting machine brands on the market. VA-360 is the most advanced zeltiq cool sculpt machine that has a different types of handpiece. VA-360 has 4 applicators: Large, Medium, Small and Mini.

If you want to buy the best coolsculpting Zeltiq machine, VA-360 is your optimal choice. Unlike two sides cryolipolysis machine, coolsculpting has no limitations. Fat freezing machine VA-360 is fit to any spot at any angel.

So what does the best coolsculpting machine VA-360 cost?

The price is different due to how many handpieces you need. Below is the price list for Zeltiq machine VA-360.

What is a coolsculpting machine?

The advanced coolsculpting fat freezing machine is non-surgical and non-invasive. Coolsculpting is proven to be effective and safe to remove fat on the body. (Abdomen, flanks, love handles and double chin)

Cool sculpting treatment has no downtime, the reduction in the fat layer can reach at 20%-25% for a single session. We will see obvious results after 1 to 3 months.

VA-360 Cryolipolysis can be performed on multiple areas of the body. Fat freezing, or cryogenic lipolysis, is exactly like what it sounds. – fat cells are frozen for a period of time in the aim to reduce them, and it’s a non-surgical alternative to liposuction.

It was done into frostbite, and it was noted that fat cells would freeze before skin freezes.

As it’s a procedure done by a professional, it can selectively target anywhere, such as tummy, thighs, or arms. So that the patient can choose their problematic areas.

Patients are required to sit for up to two hours while cooling paddles suction the skin and crystallize fat cells.

Dead fat cell debris are consumed by phagocytes and processed through the body’s metabolism.

VA-360 applicator designed with three interchangeable contours to adapt to any body area. It offers full-body contouring treatments to their patients with results comparable to. If not better than, any other registered cryolipolysis device on the market.

The handpieces are adapted for areas of curved contours like the back, waist, and sub-buttocks, broad areas such as the flanks, love handles, and calves, and for fat folds small and large, from the abdomen and back to the arms, knees and under the chin.

360°Surround Cooling Technology unlike the conventional two-side cooling methods, increases efficiency by up to 18.1%. Allowing delivery of cooling to the entire cup and in result removes fat cells more effectively.

Each cooling applicator is engineered to target the patient’s subcutaneous fat layer without damaging surrounding tissues or nerve regions, It is through this advanced cooling technology that we are able to do treatment at any angel.

The cooling system can reach its target temperature faster than previous models, maximizing time efficiency and convenience for both patients and practitioners.

The 3 types of the applicator can meet the treatment for any angel and any spot.

The Wing Applicator is for Abdomen, flanks, and Love Handles

The Wing Plus Applicator is for Abdomen, Bra Lines, flanks Love Handles, and Below Buttocks.

The flat Applicator is for Abdomen, arms and Inner Thighs.

VA-360 has a specially made probe for double chin and knees. Traditional cryolipolysis machine only has the function for main body, legs and arms weight loss.

VA-360 gives the solutions for very small area fat removal. There is no limitation.

Sides of body including “bra fat or bra bulge”

What can I expect for a CoolSculpting treatment?

CoolSculpting, we also called cryolipolysis, is non-invasive and non-surgical body slimming and shaping. The body contouring procedure works on the fat cells which in the areas treated by a safe and controlled cooling. The study has shown 20%-25 fat cells will be removed by one treatment.

What should I prepare before coolsculpting treatment?

Every people has a different body type, your doctors will judge if you are a candidate before a Zeltiq coolsculpting treatment. Coolsculpt machine VA-360 use surrounding 360 cooling, which is safe and almost no recovery time.

Actually, you don’t need to prepare too much for coolsculpting treatment. It is a non-surgical procedure. However, the doctors will also confirm if you are fit for this treatment. An ideal candidate is a fit and healthy body. Apply aspirin(anti-inflammatories) before the procedure will reduce the risk. The doctors will take a photo to make before and after comparison.

The beautician or doctor will use a high-quality coolsculpting machine to do the procedure. VA-360 has 4 different size applicators for any spot and any angel fat removal treatments.

During the treatment, the doctor will apply the anti-freezing membrane and applicator to the body area. The intelligent applicator delivers controlled cooling to the subcutaneous fat cells.

The doctor will set the fittest temperature, vacuum and treatment times on the target area. The Zeltiq machine VA-360 could work at the same time, so you don’t need to worry about the treatments that will take a long time.

You may feel pulling and pinching during the process because the coolsculpting machine needs vacuum to suction the targeted area. The pain is acceptable during the treatment. The fat freezing treatment generally takes 30 minutes to one hour. The patients can read, listen to music or even work during the procedure.

What to expect after CoolSculpting

CoolSculpting procedure almost has no downtime or recovering time. You could back to your daily life immediately after the treatment. Most people are approved to resume normal day-to-day activity immediately after. For some patients, a little redness or soreness may happen in the area targeted, and the side effects will fade in a few weeks.

Generally, you will see obvious results in around 3 weeks. The optimal results you will find after two or three months, and the process will last for up to six months after the initial treatment. Certain people and areas of the body may require more than one treatment.

Although CoolSculpting machine results are very good, it cannot replace a healthy lifestyle. Keep a healthy diet and exercise frequently is important to maintaining results.

How much is the cost for a CoolSculpting treatment?

There is not a fixed price. The cost is decided by the body area being treated. The bigger the treatment area, the higher the cost. Treat more areas can also increase the cost. Where are you from, which machine you are using, and your health are other factors into the total cost of CoolSculpting treatment.

The CoolSculpting official web says the average cost is between $2,000 and $4,000 per session. You could also contact us for the detail solutions for the cost of cool sculpting machine treatment.

Can I do CoolSculpting treatment at home?

Coolsculpting machine at home seems to be much cheaper and easier. But the truth is cool sculpting at home using ice packs do not have the real results. They cannot provide the needed suction mechanism to pull subcutaneous fat to the surface.

At the same time, the cooling temperature can not be very low. CoolSculpting at home using ice packs will freeze your skin rather than the fat. Frostbite is a serious risk with DIY CoolSculpting.

Does the CoolSculpting machine really work?

The results for CoolSculpting treatment will be obvious and last a long time. The reason is the technology CoolSculpting kills off fat cells, and will not come back.

But if you gain weight after your CoolSculpting treatment, you may gain fat back in the treated area or areas. In general, the best results will find 2 or 3 months later.

Yes, coolsculpting machine treatment is permanent. But the permanent results is on the basics of controlling your weight. If you gain the weight and not change your diet, the results will be much reduced.

Yes, it is safe. Cool sculpt is a noninvasive procedure, the risk and side effects are very low. Unlike two sides cooling, 360 surrounding cooling VA-360 can cover all the area of the target area. The energy delivery is even.

360 surrounding cooling use silicon material for the fat freezing applicator. Silicon probe is soft and comfortable. There is no risk for frostbiting.