Coolsculpting vs Liposuction, which is better?

Coolsculpting vs liposuction, what is the difference between them and which one is more convenient? To better understand the subject, let’s first take a look over each procedure and see what it’s all about.

Losing weight is not an easy task. Many times we spend our lives on strenuous diets and exercises that at the end of the road are not effective enough or do not provide us with the desired results, so most of the time we end up in discouragement and frustration. Fortunately, there are procedures that benefit us with fast and impressive results. This is the case of coolsculpting and liposuction.

The term coolsculpting refers to lipid freezing. It is a relatively new and non-invasive procedure that aims to destroy fat cells or adipocytes. With this technique, fat cells are cooled down to temperatures below zero degrees. This procedure is performed directly on the target area.

First, suction is applied to separate the fat tissue from other tissues and muscle, then a plate-shaped applicator is used over the skin to cool down fat cells to a point where they become crystallized. In this manner, fat cells are destroyed and then eliminated from our body through the urine. The technique by coolsculpting machine is safe and does not cause any damage to other surrounding tissues.

Liposuction is a type of cosmetic surgery. It is also known as liposculpture or body contouring. This surgery uses a suction technique to remove excess body fat. Like coolsculpting, liposuction is used on specific areas of the body, such as the abdomen, hips, thighs, buttocks, arms, or neck-areas that have not responded adequately to diet or exercise. It can also be used to shape other problem areas such as the chin, neck, cheekbones, upper arms, and breasts.

For this surgery, the plastic surgeon uses a liposuction machine in conjunction with several special instruments called cannulas that are inserted under the skin through small incisions. For this reason, liposuction requires the use of anesthesia, which can be local or general.

Typically there are four types of liposuction procedures and the technique to be used will depend on the area to be treated:

Coolsculpting vs Liposuction. What’s the difference?

As we mentioned before, both procedures are widely used for removing excess body fat. If you are thinking of undergoing one of these procedures, you will be wondering which one is more convenient for you and what are the main differences between them. To give you a clearer idea, let’s now compare both procedures in terms of their efficiency, safety, recovery and costs.

Coolsculpting has proven to be particularly beneficial for people who have problems with localized fat in certain areas of the body, such as the hips, thighs or abdomen, which has not been able to be eliminated by diet or exercise. However, the treatment is not indicated for obese people, as the fat is gradually eliminated in small amounts over a relatively long period of time. Coolsculpting is a very effective treatment, reducing fat layers by approximately 25%. After the procedure is completed, fat will be removed naturally over the next few weeks. The patient will begin to notice the first changes following three weeks, but fat removal will continue for the next few months. There are cases that have reported fat loss for up to five months. You can engage into another procedure after four months.

Liposuction is also a fairly effective procedure since it significantly reduces the number of adipocytes in specific areas of the body. You may be able to remove about 11 pounds of fat with liposuction. Through liposuction, the plastic surgeon can also work and sculpt those problem areas. The results and changes in shape that are obtained through liposuction are usually permanent, as long as the patient maintains stable body weight. Most people usually need just one procedure to see results. 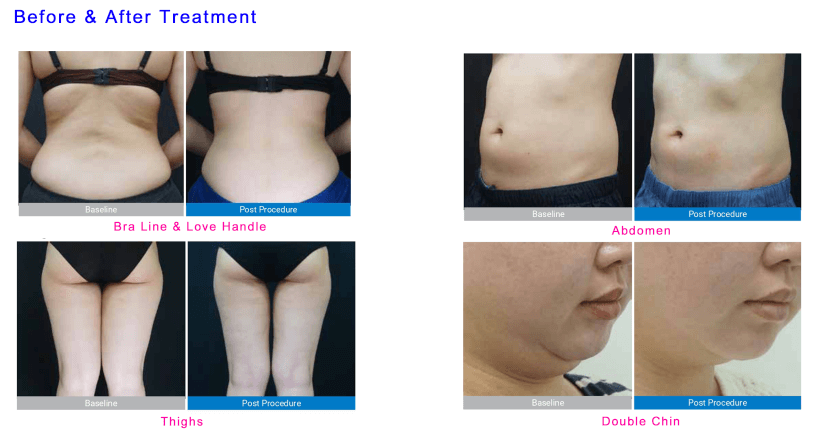 Because coolsculpting is a non-invasive procedure, it poses no health risks and causes no adverse reactions or side effects. It is not painful either since low temperatures cause a numbing effect.

Unlike coolsculpting, liposuction is considered an invasive surgery. There are several risks to consider before undergoing this type of procedure. This procedure is not recommended for people with heart problems, coagulation disorders or pregnant women.

Among the possible complications of liposuction are:

In the case of coolsculpting the recovery is extremely fast. Sometimes, patients may experience some redness or small bruises on the skin, a feeling of tightness, cramps or numbness in the treated areas that usually disappear after several days without leaving any sequelae.

Unlike coolsculpting, liposuction can involve a rather painful recovery, as there may be several incisions that must heal. You may also experience swelling and bruising. You will need to take medications to help control the pain and antibiotics to reduce the risk of infection as the surgeon will make several incisions in the skin, especially in large areas, since he will need to approach the area from several directions in order to achieve a better silhouette. The recovery also takes longer, since in many occasions it is necessary to introduce drainage tubes inside these areas.

These tubes are in charge of removing the blood and the liquid that may accumulate during the first days after the surgery. The patient will also have to wear a compression garment to reduce the swelling for a certain period of time as indicated by the surgeon.

The cost for coolsculpting approaches $2,000 to $4,000, while the average cost for liposuction is $3,500. Prices may vary depending on the area of the body you wish to treat and your geographic region.

Why you should choose coolsculpting instead of liposuction?

When comparing the two procedures, it is not too difficult to determine why you should choose coolsculpting over liposuction. It is possible to conclude that coolsculpting is an innovative procedure that has come to be used as an alternative to traditional liposuction procedures.

More significantly, coolsculpting is a quick and simple technique that can provide you with great results without the need to engage in a life-threatening surgery.

In addition, coolsculpting does not require to perform any pre- or post-operative procedures. Furthermore, its price is quite accessible and there is no marked difference among them.